Missionaries of the Pacific Northwest met in November. 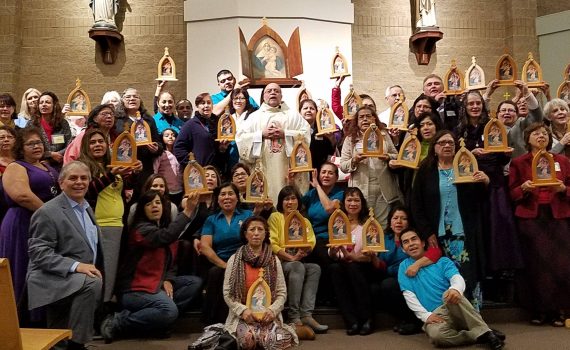 Missionaries of the Pacific Northwest met in November.

It is with sincere gratefulness to Our Mother Thrice Admirable, Queen and Victress of Schoenstatt, that we report the success of the first regional conference of the Schoenstatt Rosary Campaign, held November 18 – 20, 2016, in Kennewick, Washington.  Our Mother Thrice Admirable guided us and worked many little miracles to help us as we planned each detail of the conference over the course of one year.

More than 230 people from Oregon, Washington, and Idaho gathered at St. Joseph Parish, Kennewick, to learn more about Schoenstatt’s Contribution to the New Evangelization and to come together  as a Schoenstatt community in the Pacific Northwest.  Approximately 135 were from the English-speaking community and almost 100 were from the Spanish-speaking community.  It was a great blessing to have both communities  come together for a bi-lingual conference, to celebrate our mutual love for Our Blessed Mother! We were pleased that 43 married couples attended together, making up more than a quarter of the total in attendance; also, 18 girls’ youth participated and were given a separate teaching Saturday afternoon.

The presenters were Schoenstatt Fathers Marcelo Aravena and Francisco Rojas, and Sister M. Isabel Bracero. Mr. Enrique Soros did a magnificent job as Master of Ceremonies. Each of the five main conference talks were presented in either English or Spanish; headsets and simultenous translation were provided for those not understanding the language of the talk being presented.  A break-out session was offered Saturday for men and women, separately, in both language groups. Holy Mass was celebrated each of the three days, with the opportunity for confession on Saturday afternoon. The meals were prepared and served each day by the Spanish Rosary Campaign group at St. Joseph Parish and the Connell/Eltopia Knights of Columbus. We are truly grateful for the many offerings of time and talent (Mass musicians, sacristans and servers; conference decorations) given by so many that  made everything possible!

Many in attendance did not know anything about Schoenstatt and were very happy to have learned more about the Movement from their participation in the conference.  We made many new friends and contacts who are eager to be part of the Schoenstatt Movement! With confidence, we pray that our follow-up efforts will be blessed by a real growth in the Schoenstatt Movement in the Pacific Northwest.