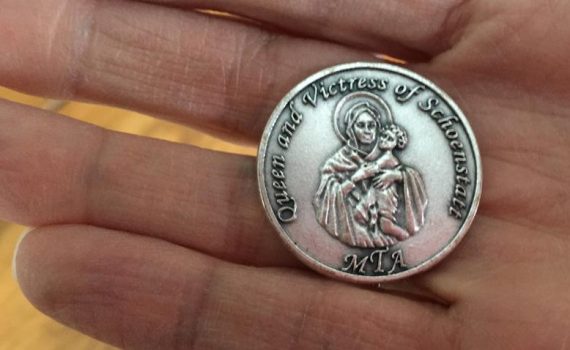 This token was first inspired after witnessing a young man sobbing alone on the side of a busy roadway. Wanting to give him something to show God’s love, a miraculous medal was the only token that was available.  Months later, the inspiration came stronger when a dear friend, who suffered of dementia, had a habit of repeatedly giving away St. Pio tokens.

Our Mother gave me the final inspiration to have a token inscribed with her image and the Divine Providence prayer on it. “Yes, Mother for you anything.” Thousands of these tokens have been given away throughout the world.  Now our MTA can be placed right into the hands of everyone.

This token is meant to be kept while it is needed and then to be passed along.  To those who suffer, it offers a tangible sign of God’s love and comfort. Everyone can hold on to it as a reminder of God’s love for them in their suffering and the promise of the Divine Providence Prayer.

One powerful example is when a friend gave an MTA token to a young, poor boy, who was asking for money at the grocery to help people carry their grocery bags to the car.  The boy was hungry and wanted money for food and was willing to work for it.  The friend gave him money and an MTA token. Fast forward a couple months and this same friend, a police officer, is called to an apartment where there was a hostile boy with a knife.  The boy was not listening to another officer’s command to put down his weapon and he was viewed as a threat to his partner.  Seconds away from pulling the trigger to protect his partner, the officer recognized that this was the same boy he had given the MTA token to.  He mentioned the token and reminded him about its giving.  Immediately the boy’s demeanor changed.  He dropped the knife and began to cry.  Someone had stolen his food and he was willing to fight to get it back.

This MTA token has already saved one life.  Will you join us to share our Mother’s Token of Love?