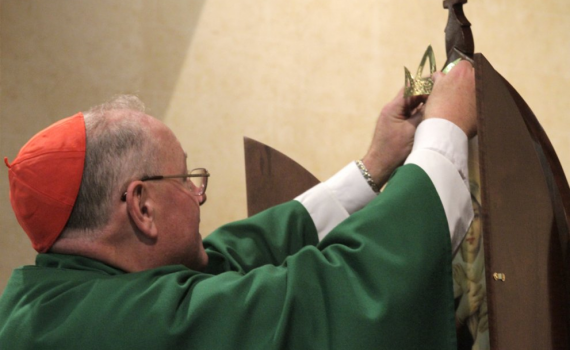 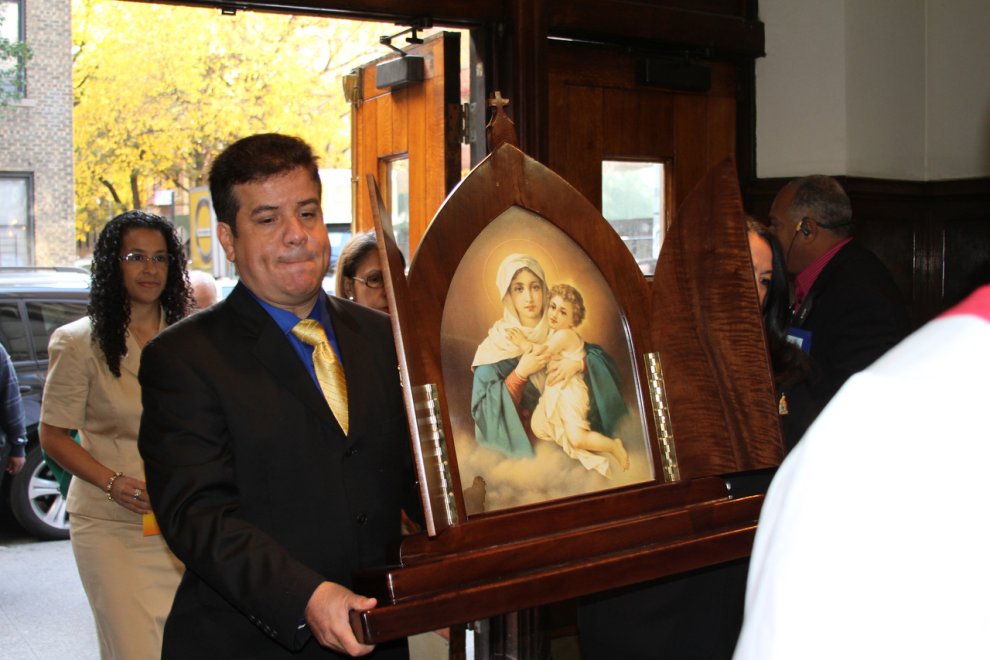 Viva Schoenstatt!” With these words began the homily of Timothy Cardinal Dolan, yesterday, Sunday, November 3, at the crowning Holy Mass for the Auxiliary Pilgrim Mother of New York City. The Church, Our Lady Queen of Martyrs, with capacity for over 900 people opened its doors to a little over 1,000 people. Nine priests from different parts of the Archdiocese of New York concelebrated the Holy Mass. It was a gift to have among us Monsignor McWeeney, head of the Ecclesial Movements in the Archdiocese. It was a great joy for all those who work with the Rosary Campaign in the different parishes of upper Manhattan to see some of their pastors there, supporting their apostolic endeavors. Fr. Francisco Rojas, from the Schoenstatt Fathers was there, too, and the parish priest of Queen of Martyrs, Father Antonio. Schoenstatters from Staten Island, Queens, Bronx, Washington DC and New Jersey were with us for this occasion.

The Blessed Mother had a most worthy throne made with golden material, and decorated with yellow and white roses. As the entrance procession began close to 1,000 tiny flags with the Schoenstatt logo were waved as a greeting for both the Auxiliary Pilgrim Mother and for Cardinal Dolan on his way to the altar.

With a Church packed full, we sang with joyful spirit and very rhythmic accompaniment: “Madre Admirable, Madre Peregrina.” The community of the Schoenstatt Rosary Campaign coordinators of upper Manhattan, are celebrating 10 years since the arrival of their Auxiliary Pilgrim Mother. The opportunity to celebrate this occasion in connection with the opening of the jubilee year 2013-2014 also opened the doors to have the Cardinal of the Archdiocese of New York City come and perform the crowning act.

In the homily the Cardinal gave a very beautiful message on the littleness and greatness of Schoenstatt. Comparing the littleness of Zaccheus with our spiritual smallness and the smallness of the Blessed Mother, Cardinal Dolan pointed out the little way in which Schoenstatt began so many years ago. “And, now, look! How much it has expanded all throughout the world! Que viva Schoenstatt!” 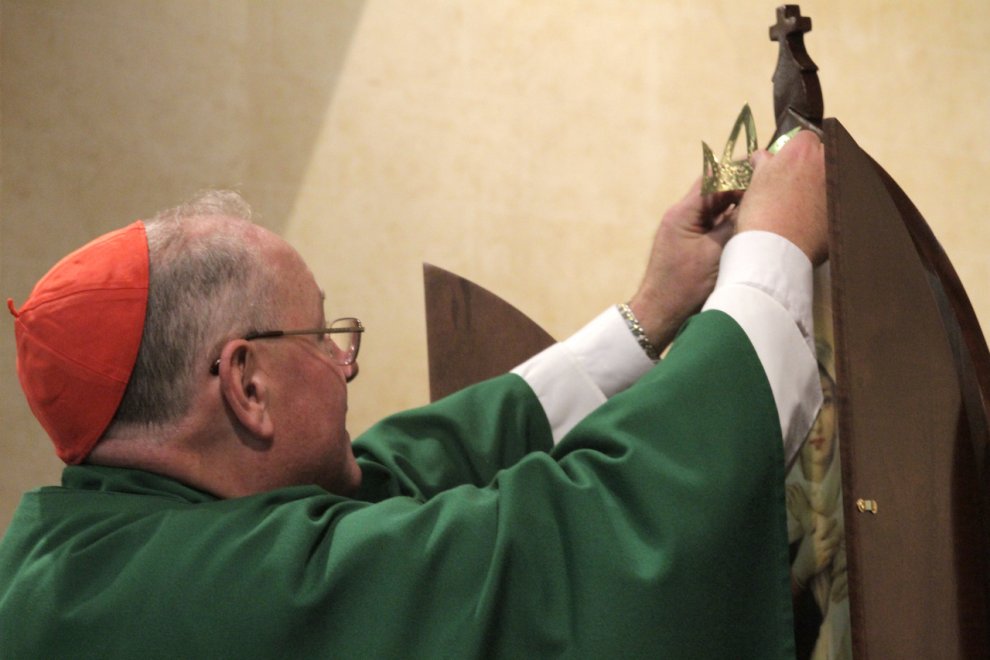 With this joyful spirit, at the end of communion, the Cardinal knelt before the Auxiliary as it was being held by two of the missionaries of the Rosary Campaign of upper Manhattan. He prayed before her and crowned her as Queen of the New Evangelization.

After that the Queen was placed back on her throne. After Holy Mass many pilgrims came to greet, visit and thank her. Our congratulations to the Rosary Campaign coordinators and missionaries of the upper Manhattan area, who organized such a beautiful and worthy ceremony! May our newly crowned Queen of the New Evangelization continue to guide our steps into this jubilee year!